I'll Carry You To Mordor is a conversation game about being together until the end of the world.

Based on The Lord of The Rings, you'll tell a story about two friends who love each other with all their hearts, trying to complete an impossible task to save their crumbling world. You'll play scenes of intimacy and tenderness between the characters during their moments of respite from the hard world in which they live.

You'll get a 38 page PDF (singles) and a 20 page PDF (spreads) of the game, including basic rules, alternative settings, and optional randomness mechanics that can be used to iterate on the simplest version of the game.

This game is relatively untested, which is why it's downloadable for free! If you download the game for free (or at all!) please leave me a review to let me know what you thought, or share the game with others you think might be interested.

The game might receive updates and improvements as I continue to test and develop it- I'll be posting new versions as they come.

First, I wanted to say I do not often play to the games I get on itch.io. What I like the most is often the simple suggestion of the stories it may give birth to, and I'll Carry You To Mordor does that job quite well, from the mere title I find incredible. However we played a game yesterday and that was a good moment. We played without dice, with a freeform larp vibe, including hugs and a lot of significant silences.

We played in a lovecraftian setting : Lilac Elderberry (a librarian, maybe ? or a scientist) and Marie Boulanger (a baker) crossed a portal and were walking for day in an endless lowland where there were neither things to see nor things to hear, except each other. We spoke a lot about hope and love, but not so much about what was awaiting us. We asked a lot of Big Questions, and our little questions were most of the time replaced by silences.

About the way it is written, explanations were clear, and examples very useful. We feared a little that if we chose a medfan setting, the game would transform itself in a re-creation of Sam and Frodo's journey, which we didn't want to do, but it was finally quite easy by choosing another setting.

Next time I'd like to try the dice rules, as they may give the game a surprising and pleasant turn.

Thank you a lot for this game, we enjoyed it a lot. 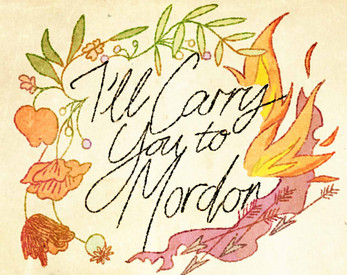